Not too long ago, I helped out with a creative writing workshop over at 826NYC.  Over four weeks, the kids split into groups and created a restaurant, complete with theme, menu, and back-story.  With direction from the two teams, I drew up a logo for them. Here they are, along with everything the kids wrote. 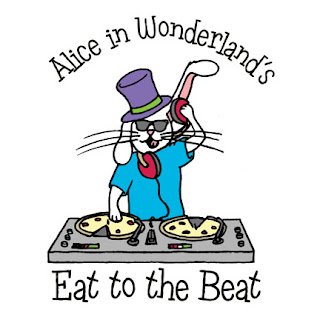 Who doesn’t enjoy music with a meal?  We at Alice in Wonderland’s Eat to the Beat agree, and we acknowledge that everyone has their own musical taste, which is why we have jukeboxes at the tables, each with their own genre of music.  Of course, we also realize that some people (like our very own chef), enjoy their meals in silence, and so there’s a “No Jukebox” section as well.  Tables are complete with teacup chairs and lazy susans that spin your meal along with the tunes.Conveniently located in the heart of Times Square, Alice in Wonderland’s Eat to the Beat takes you down a rabbit hole of adventure and delicious food.  We’re a great restaurant for families and tourists so that everyone can have a fabulous time in the city.

You might not want to work here because the chef sometimes spits in the staff meals, but don’t worry, the customers’ meals are safe!  We believe that the secret to our marketing success is the subliminal and often unkind messages about the owners that our marketing person plants in our ads.  Our owners are always involved in office accidents because the designer deliberately made their office floor too slippery, because we all know that the owners are embezzling money from the staff paychecks and hiding secret cameras everywhere!

So…Even though the owners want to fire everyone, our marketing person threatens to quit on a daily basis, the chef hates his job, and the designer’s job is done but she still needs a job, this is a true family establishment and everyone has stayed together because of one thing: We love love providing everyone else with wonderful food and peppy tunes.

WHAT PEOPLE ARE SAYING ABOUT EAT TO THE BEAT!

“World class chefs slave over the hot stove for you!”

“Eat to the Beat has different music, entertaining service, and they’re kind to customers. They make the people smile!”

“Best nachos on the planet!”

“Even though the food and theme are uncreative and don’t make sense, the service is great. And the food will still be the greatest thing you’ll eat. You’re sure to have a great, fun time. It’ll make your day once you’ve been there.” 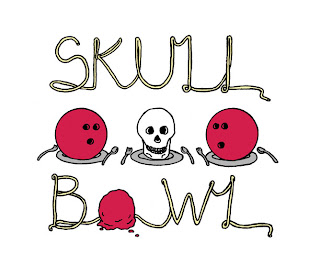 One day, the owner, Ahtziri, went scouting for a restaurant space for her dream restaurant.  The first space she found was too small, but the second space was perfect.  Then Ahtziri realized that she needed a designer, so she put up flyers calling for the best designers in the United States to meet with her.Ahtziri selected Alexis as her designer because she was the youngest and the most talented out of the 600 designers who showed up.  Ahtziri wanted a bowling restaurant, but Alexis wanted a spooky restaurant, so they combined their ideas and came up with SKULL BOWL.

Together, the owner and designer searched many restaurants looking for the perfect chef. They discovered the world-famous Chef Sebastian, who was unhappy at his old restaurant.  Ahtziri told him that he would have the freedom to do anything he wanted at SKULL BOWL.  Chef Sebastian was ecstatic to join the family and to create spooky food.

Joshua joined the team as the marketing expert.  Ahtziri, Alexis, and Sebastian found him at The Champagne Market where he was promoting pears and grapes.  It was obvious that Joshua was perfect for the marketing position because he did an excellent job selling such under-celebrated produce.  His pears and grapes eventually became a part of the SKULL BOWL menu.

Located worldwide in a spooky place near you!