He Works in Mysterious Ways…

A couple days ago, I was watching Sam Bradford accept the Heisman Award, and it reminded me that I should post a comic I did a while back.  I remember watching Indianapolis Colts Head Coach Tony Dungy accept the 2007 Super Bowl trophy and being really annoyed by how much thanking of God was going on.  I sketched out this one pager (below) that night. 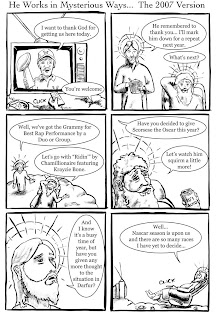 I realize that most of the time when people thank God in award speeches, they probably don’t think God decided to let them win over the other heathens.  (At least I hope that’s not the case.)  Instead, I guess that they want to publicly state that they are Christians as a show of humility. But to me, it always comes across as unnecessary acknowledgments of inclusion to an evangelical religious group.
I sort of view it like donations.  If someone makes a big donation, they might get a lot of recognition and praise for their charity (and perhaps a tax write off).  However, if someone makes the donation anonymously, they only really care about the cause they are supporting.  My views on being evangelical are similar — walking the walk is way better than talking.  Which is why it irks me even more when I come across one of the bazillion music awards shows and see a mysoginist hip hop artist or a hypocrite country star go on and on about Jesus.

Anyway, I didn’t actually ink this comic until a year later.  Even though a lot of the specific names in the comic were out of date, the underlying theme still exists so I went ahead and finished it.  (Besides, who could pass up drawing God with a mullet?)  I had plans of changing the dialogue from year to year, while keeping the last two panels the same.  Perhaps I still might!